“One must apologize for daring to offer black love to a white soul.”

“Yesterday at 1:30  in the afternoon”, as Scott Gilmore writes, “a  white van leapt the curb and careened down the sidewalk with no warning”…

“We can only imagine the beginning, the shock of seeing a van hurtle over the sidewalk, the horrible noise and screams. We don’t have to imagine the end, though; most of us have already watched it.”

Scott Gilmore’s article, published for Maclean’s magazine the same day  Alek Minassian  wrongly took ten lives, injuring 15 others, is written with astonished reflection. It paints a bare picture of a  moment that is difficult to grasp, let alone imagine despite the fact that the videos are now viral,  a moment amongst a chaos of media coverage focused on the intent and admittedly important consideration of ‘who is Alek Minassian ?’

Gilmore’s piece narrates and queries a moment of silence amidst the white noise of fear and loss,  where a police officer engaged with Minassian directly, having a seemingly one-on-one encounter with the attacker. Here, according to widely shared video recordings, Constable Ken Lam had a life-altering choice: to shoot or not shoot a potential (solely referencing the continued  debate on whether Alek Minassian  should be declared a terrorist) terrorist suspect .

There may have been explosives in the van. Lam wouldn’t have been able to know. Minassian may have been further armed in a detrimental way. Minassian asked to be shot in the head. Yet Lam chose not to shoot. Lam, essentially, chose life.

I am in Canada presently conducting fieldwork on the topic of racialisation and counterterrorism.  I am attempting to view the present of the past and to analytically examine ongoing discussions concerning M-103 on the study of systemic racism and religious discrimination and Bill C-59, a bill meant to address the controversy of Bill C-51, and that will establish 3 new  Canadian security acts:

Therefore, the unfortunately interconnected issues of race and terror are constantly on my mind thanks to my research and present engagement with Canadian policymakers and counterterrorism experts. Nonetheless, I could not help but read Gilmore’s essay with a tinge of  some feeling I could not and still cannot properly explain with anything else but a question. The same question that Gilmore poses to his readers:

“What was he [Constable Ken Lam] thinking in that moment when he engaged Alek Minassian?”

Was he thinking about Minassian’s race or ethnicity?

I pose that question, not because I am aiming to be provocative, but because numerous Canadians were clearly wanting to know the racial and ethnic attributes and migrant history of Alek Minassian yesterday. They still want to know now. Not only were there accounts of Minassian being “wide-eyed, angry, and Middle Eastern”, accounts that were notably disproportionately  retweeted in contrast to accounts of Minassian being ‘white’. But, in the aftermath of the attack ( which we are still in), various members of high social media status , including Faisal Kutty of the Canadian Cross Cultural Roundtable on Security have gone as far as to express sentiments seemingly of relief that Minassian was white, or citing Kutty’s choice in twitter language,  using his own hashtags, #VanDriverNotMuslim , #VanDriverNotMiddleEastern.

I, like  Kutty and many other Muslims and/or people of colour held my breath yesterday, hoping the perpetrator  was not Muslim or a person of colour. Not because of the upcoming election, which has and will likely deal with the topic of counterterrorism  and the specific subject of the Liberal Party’s approach to terrorism. Not because Minassian’s whiteness is somehow preferred over discussions of  toxic masculinity or mental health (though Minassian’s mental health is notably only becoming a factor as his societal identification of being ‘white’ is further being reinforced).  Also, it should be noted, on an academic note, that continuously within public discourse on terrorism when the perpetrator is found to be ‘white’, in most instances their whiteness tends to serve as a barrier to fruitful discussion, and to neutralise analysis of the role of racialisation in counterterrorism and security (i.e.  Canada continues to view the role of phenotypically white terrorist actors as episodic, separate from Canada’s history of White Migration Policy and previous institutional endorsement of  white national identity).We, academics and society alike, don’t like to talk about white terrorism despite the necessity of this conversation.

I hoped the perpetrator Alek Minassian was not Muslim or a person of colour so that we, as academics, individuals, and policymakers, could finally discuss why the rest of the world  expected, if not wanted, Alek Minassian to  be.

As I write this blog piece there are conversations still ongoing  where Minassian’s  suggested whiteness is being contested. This is so, even though a possible motive for his attack has been brought forward, where Minassian’s  possible anger at being rebuffed by women is being suggested as a reason to why he was prone to violence ( this needs to be further examined, though it will not be highlighted in this essay).

Minassian’s possible  Armenian ancestry and  the subject of whether Armenians are white has also come into play. This development in conversation is important. The evident societal insecurity over how whiteness and the privilege of being white could possibly connect  to this incident of terror plaguing Toronto, needs to be addressed and considered more. The question of ‘why the Canadian public and politicians (we will see how they respond in the upcoming days), need a non-White, religious, and cis-gendered male to be the face of terror in order for their world views to stand still?’ is an important question that needs answering. Why are we confused and in chaos when the face of our terror is white?

Furthermore, why should we be proud that Lam did not kill Minassian?  Several Canadians are notably expressing how considering Minassian’s actions, Lam did not kill him ,  and for that we should have pride. Some Muslim identifying commentators going as far as to express pride and patriotism, in being Canadian as unlike in Westminster, as unlike in  Münster, as unlike in Nice, the perpetrator did not die and we as Canadians chose to let Minassian live and face his crimes. 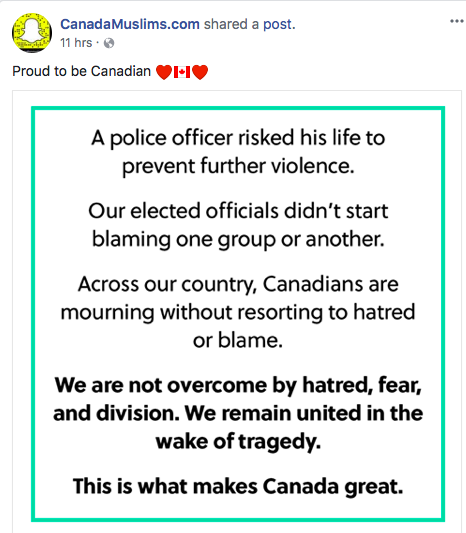 It is strange to be made to feel this way about your country.

To be presented with the idea that a police officer lawfully carrying out an arrest in the face of extreme peril, somehow  represents what people with your passport stand for. To be presented with the notion, that you should be proud that the officer did not shoot while the rest of the world was watching. That you should be proud, that this time, out of many, the officer did not unlawfully kill a subject of terror; when around the world and in Canada, unarmed visible minorities  who have not done what Alek Minassian has done, who have not asked aloud to be shot, do not walk away.

“ ‘They [the Jews]have allowed themselves to be poisoned by the stereotype that others have of them, and they live in fear that their acts will correspond to this stereotype. . . . We may say that their conduct is perpetually overdetermined from the inside.’ All the same, the Jew can be unknown in his Jewishness. He is not wholly what he is. One hopes, one waits. His actions, his behavior are the final determinant.”

As a person holding my breath yesterday, waiting to know if the face of Canada’s terror would once again be that of  a Muslim-identifying perpetrator, or  a Colten Boushie,  or a Pierre Coriolan, it is difficult to read Scott Gilmore’s narration of the cop who didn’t shoot.

Most honestly, this is because there is an unquiet  understanding in Gilmore’s essay, that we should be amazed that Ken Lam,  another human being doing service in the name of  the law, laws said to uphold the lives of all of us equally, let a visibly violent Other who may or may not have been ‘white’ ( we are still too desperately trying to figure this out- was he really and truly ‘white’?), live to see today’s trial. Scott Gilmore’s essay is difficult to read because it emphasizes the reality that  we ( particularly people of colour)  are not expected to make it to the next day, and that Minassian was gifted something by Lam, something that he was undeserving of.

Alek Minassian was not ‘Middle- Eastern’ and was not ‘Muslim’, or so we, those Muslim and POC Canadians finally breathing a sigh of relief will say, ignoring the problematic nature of these labels, our anxiety waning. Yet,  in that moment, where and when Ken Lam faced Alek Minassian, can we as Canadians, Canadians who continue to contest whether our policies and laws regarding crime and terrorism are systemically racist,  honestly say that Alek Minassian’s race would and does not matter to us?

In the upcoming days we will wait and see what happens.  We will see  whether the rest of us, like Lam, will pause before acting  in the face of terror and loss or whether we will altogether forget that Lam did not shoot, and move forward as though he did.